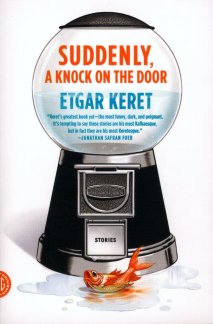 I love this short story collection. Each one is just so brilliant and form-defying. These are the kind of stories that plague my dreams and nightmares each day. I wake up seeing these people, awaking to the call of their longings and threats, peeking from the edge of my seat in some miraculously acquired human condition. Etger Keret is Israeli, and he penned these stories in Hebrew originally. These have been translated by Miriam Shlesinger, Sondra Silverston, and Nathan Englander. My personal favourite is the title story.

The stories are set in his head, and the author prefers to be identified as Jewish than Israeli. His writing style reminds me very much of Ibn-e-Safi’s own witty parables that are as absurd as they are rational, goofy yet urgent in all their strangeness. Discerning is his ear for detail that clamours above the noise around us; his prose elevates rather than distracts from this noise:

“It all started with a dream. A short, fuzzy dream about his dead mother. In this dream the two of them were sitting on a straw mat in the middle of a clear white surface that seemed to have no beginning and no end. Next to them on this infinite white surface was a bubble gum machine with a bubble top, the old-fashioned kind where you put a coin in the slot, turn the handle – and out comes a bubble gum. And in his dream, Robbie’s mother told him that the afterworld was driving her up the wall, because the people were good, but there were no cigarettes. Not just no cigarettes, no coffee. No radio. Nothing.”

Lies have character and soul, and are full seeing sentient beings. Time has its nails bitten. Cheesus Christ is a restaurant that serves hamburgers without cheese and is run by a clinically depressed CEO who refuses to answer e-mails. The situation is absurd, but the problem real. Wisdom abounds the nonsense: “When a dedicated employee turns to her employer with a problem, especially one related to the workplace, the least he could do is acknowledge her existence.” There is a loner who breakfasts alone in the cafe but learns to vicariously through others. Needles prick less than a father’s touch in another. Everyone is going through a hundred and one dress rehearsals; each character is constantly improvising. (“The fish’s secretary asked her to wait until he’d finished an international conference call with his partners in Taiwan”). These are coming-alive stories — no flat characters or dull plot points — only honking until “your heart’s content.” Another story’s narrator eulogizes his dog his dear friend his lover who talks to him in his dreams wearing a grey suit advising in human barritone, “everyone knows there’s no real money in developing the human race. Or any other race, for that matter. But since it’s [ecology] a new field that’s wide open taxationally, there’s nothing to stop me from submitting a mountain of receipts.” Then there’s the story about a man with a zipper mouth. Taking advantage of the fact that her lover slept with his mouth open, Ella slips her finger under his tongue to find a zip! But when she pulls at it, her lover Tsiki opens up “like an oyster”, and inside is Jurgen, a far more alive character. “Work is like a moustache,” he says, “it went out of style long ago.” These are just few glimpses into the quirky world of this joyous collection. All these characters are inward looking and draw their hallucinatory powers and worldly knowledge from this skill. If there is a writer whose fiction style I might identify with, it would be Etgar Keret! Ibn-e-Safi and Edwidge Danticat are others. Rushdie started it (for me), although his prose is trenchant with politics and histories and epic (at its peak), way more verbose and magical nihilist in comparison to Keret’s clever yet contained, dense yet ticklish, deliberate yet no less invisible storytelling. Style stems from a writer’s morality and political axis perhaps. How and where he grew up and when. And although I have enjoyed a lot of postmodern fiction in life, those works have often brimmed with salient iron structures and heroes and heroines who eschewed those; I don’t see any of that resistance functioning as a plot device in Keret’s work. His work is almost post-resistance and by that I don’t by any stretch mean lazy. Like a book of intelligent jokes and riddles, it offers momentous wit and humour. One of Keret’s narrators describe this work best as “an amalgam of deep insights and aluminium. It won’t rust, it won’t bust, but it may wander. It’s super contemporary, and timelessly literary.” The true test of his storytelling however may lie in whether he is able to sustain an entire novel on the strings of his absurdo-realism and something I wonder often about, i.e., could Etgar Keret pull off a marathon?